The network is built by un-making

Entanglement crosses geographical borders, builds bridges between diversities and differences; it brings about encounters and misunderstandings; it gives rise to conspiration but also to dissent.

The coming together of organisations and individuals on the third day of Lumbung Nuquí could be summed up as the unravelling of the structural problems experienced in each territory by Afro, indigenous, mestizo, ethnic, peasant, women, workers and workers’ communities in the global south. These problems often take root in our bodies and a web of discriminatory ideas, words or actions is naturalised in our daily lives, where extractivism, machismo, classism, cultural dispossession, unbridled consumption, among others, operate.

Why do violent and oppressive acts arise that break down our networks of affection and care? How do we address these situations within grassroots social, political, artistic and cultural organisations? How do we self-manage conflict?

To have uncomfortable conversations and allow tensions to be expressed is to give us the opportunity to reflect collectively. We may not reach consensus, but we may find, in contradiction, an otherness that is not separating but complementary. The differences at our service are the foundational basis of localised, territorialised, transcultural and historical political places. They are also, without a doubt, the door to self-observation, to the revision of one’s own privileges and, why not, to the renunciation of these privileges when they have been mechanisms of oppression of other human and non-human beings.

To those who read carefully, we invite you to ask yourselves: In which spaces have I been oppressor, in which spaces oppressed, where do I currently place myself within the struggles I have been engaged in, how am I directing my energy towards a purpose beyond my own wellbeing? Understand ourselves as a historical construct of inequalities, recognise our colonial heritage, energising dispossession, savage capitalism, disconnection from nature. Then, what actions can I take to strengthen ties without disintegrating or losing my identity? 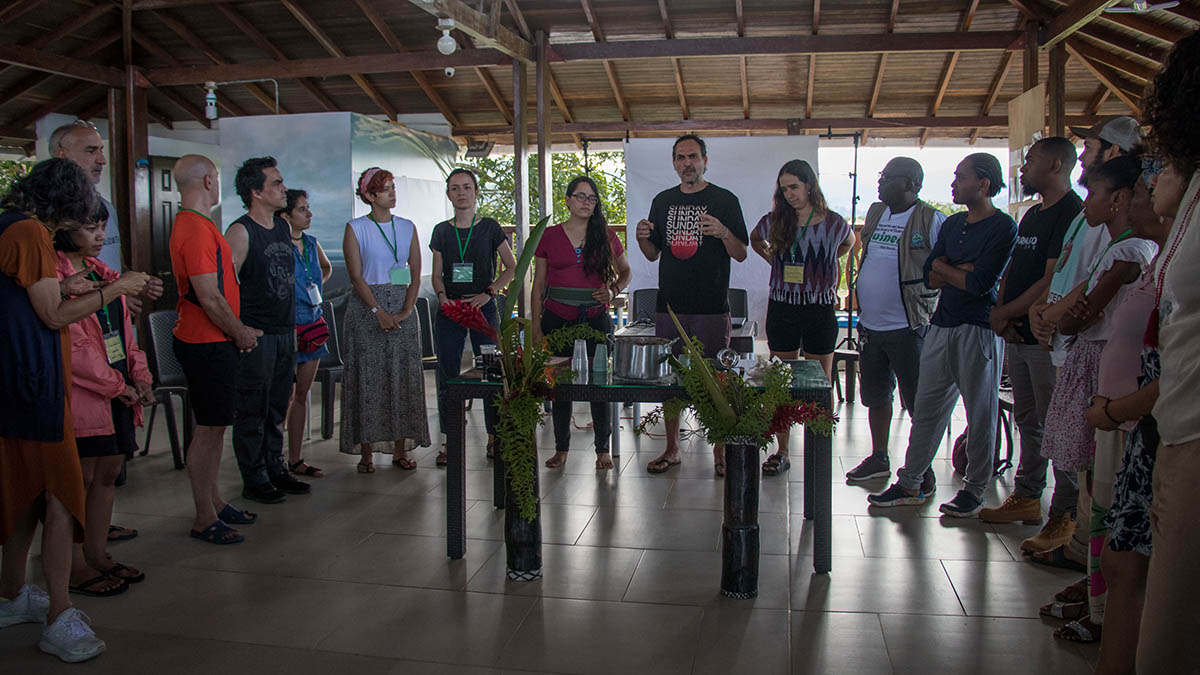 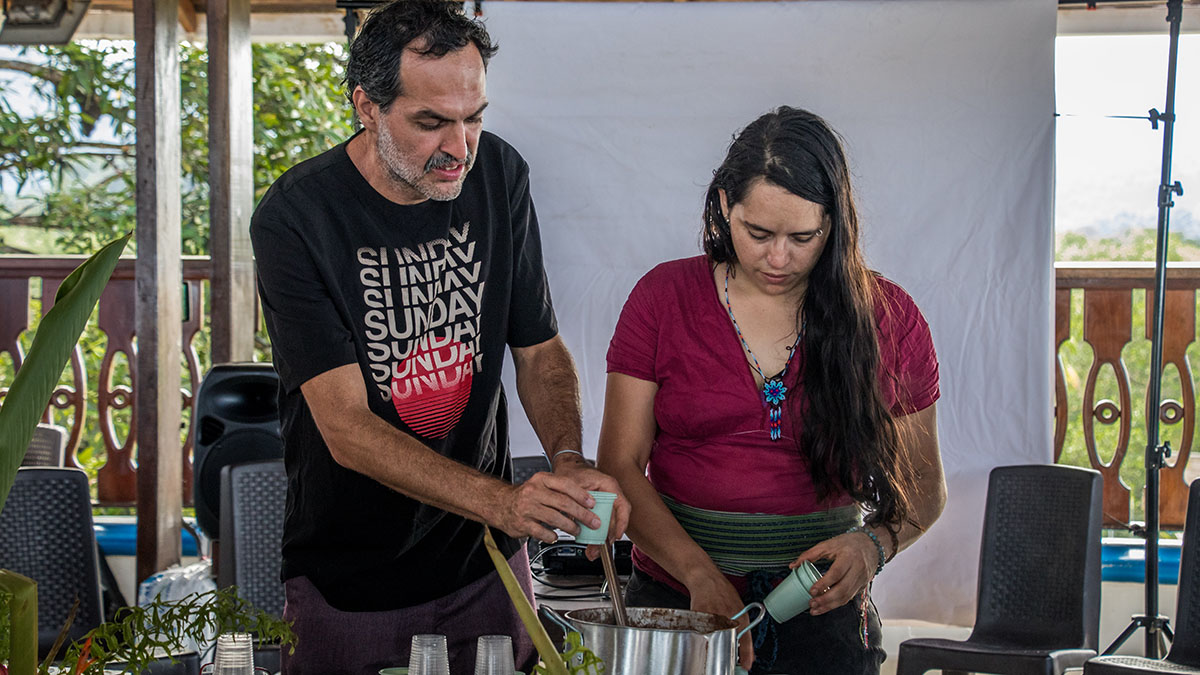 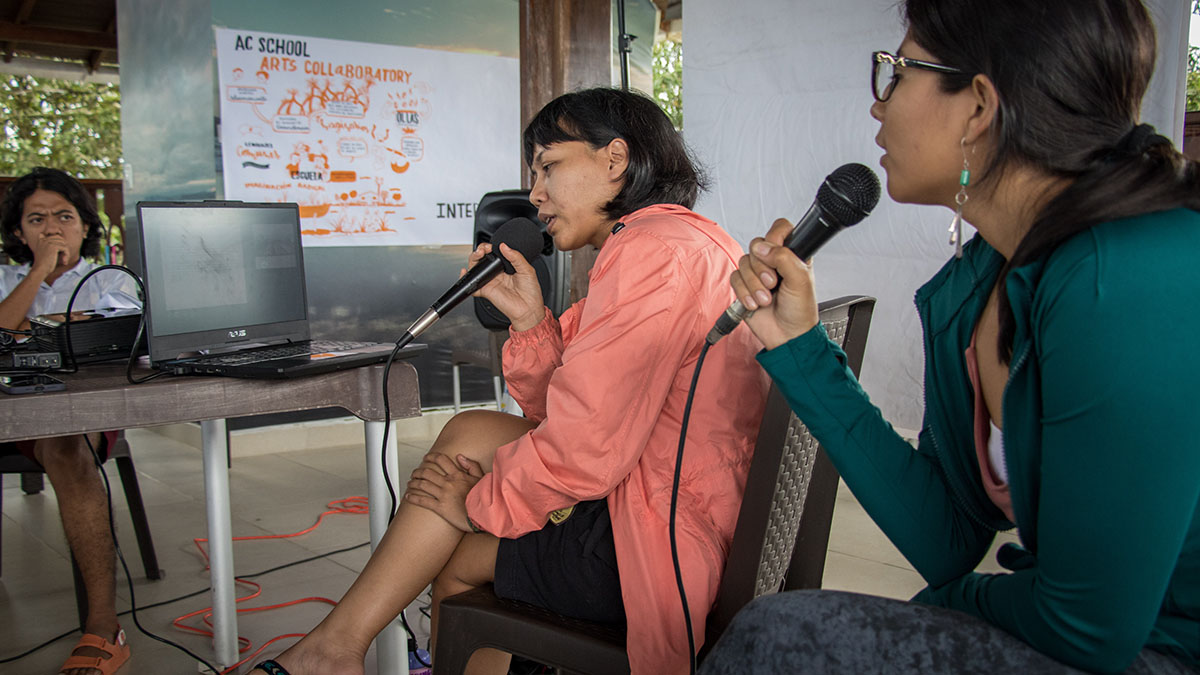 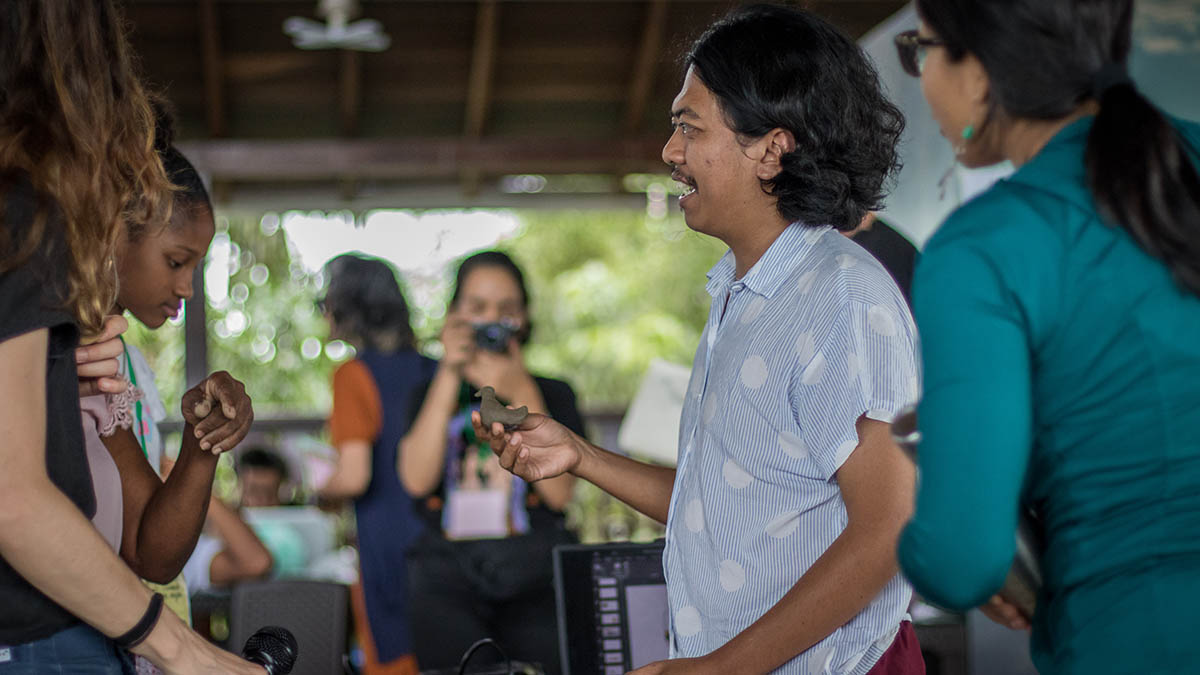 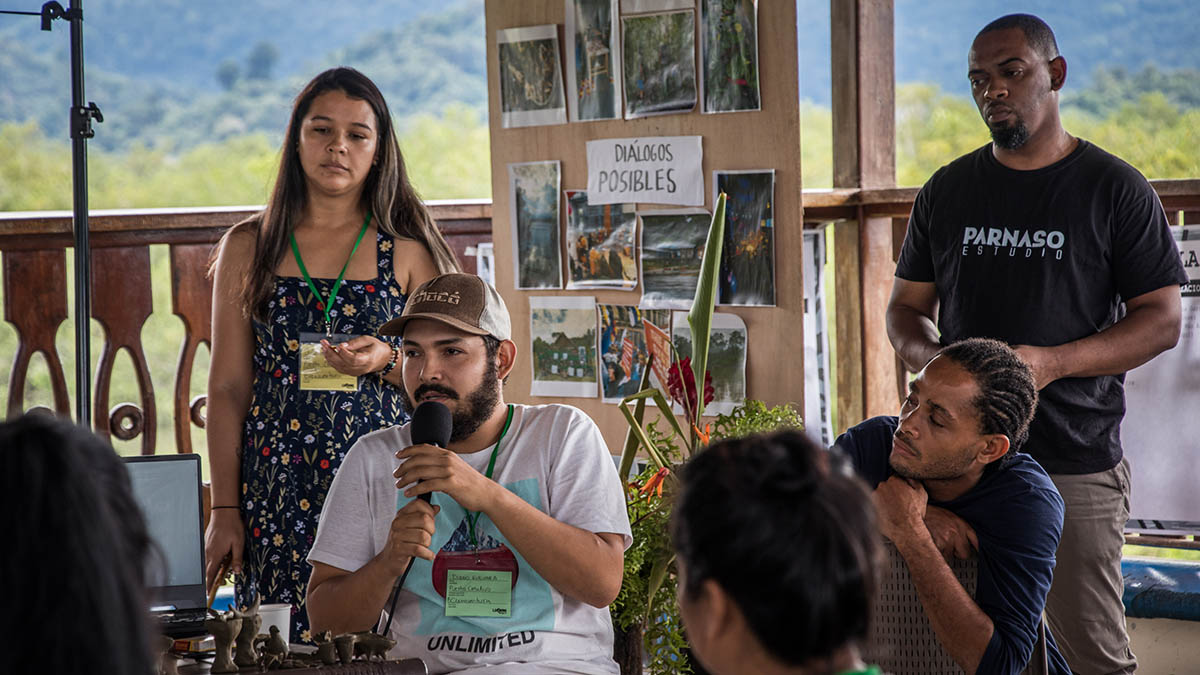 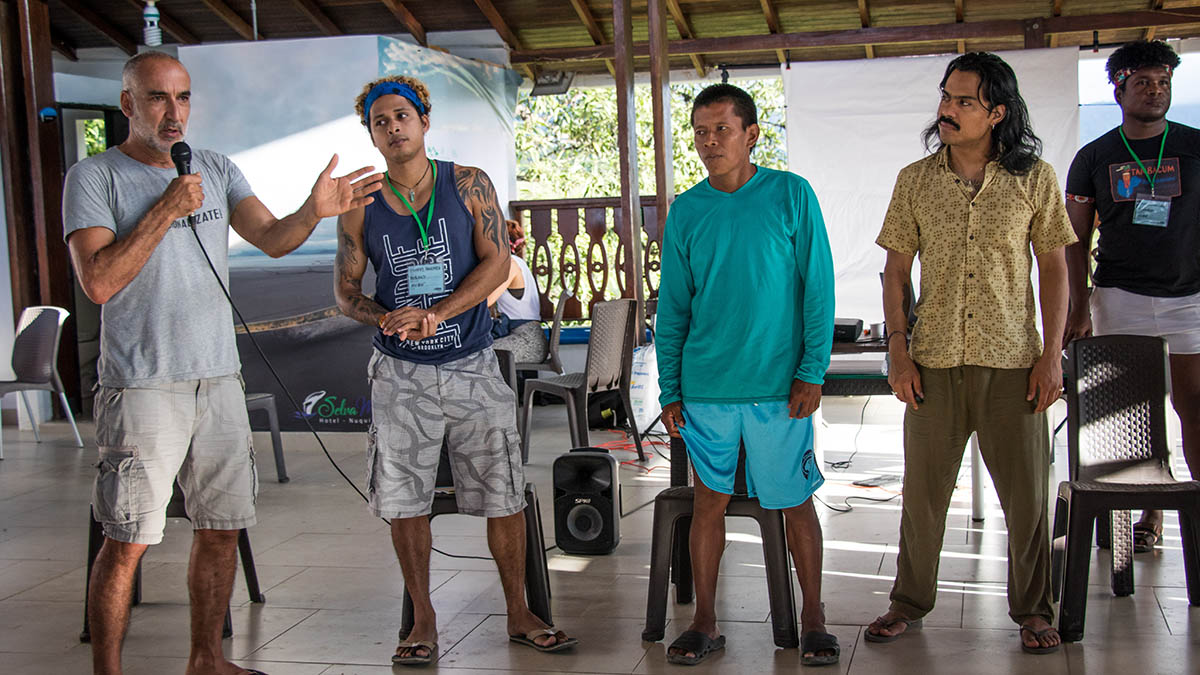 The Arts Collaboratory Platform, created in 2007 by three Dutch foundations (Hivos, DOEN, Mondriaan), has strengthened 25 organisations in the Global South (Africa, Asia, Latin America and the Middle East). It has positioned itself on the basis of breaking with post-colonial and neoliberal practices, in order to strengthen horizontal relations and micro-policies that transform organisations and their leadership models. Face-to-face assemblies have opened up spaces for conversation to question the paradigms of art funding and the dynamics of relationships between funders and organisations

The organisations Lugar a Dudas from Cali and Cráter Invertido from Mexico spoke to us about their work experiences, guided by the principles of solidarity, affection, creation, self-governance and collective work. Their stories invited us to reflect on the radical imagination, a creative collaboration between communities. Their work, from their specific contexts, is united by common objectives, by modes of community and solidarity economies. The struggle for the autonomy of their territories, as well as the practice of the common pot, the minga, the harvest and the collective imagination.

“The joyful encounter with failure is a starting point.”.

From Indonesia, our friends from Ruangrupa and Jatiwangi Arts Factory, part of the Interlokal Lumbung project, brought soil from their land on the journey to Nuquí. The land represents their families and the bonds of affection, trust and community. Lumbung is a form of community organisation.

We took the damp clay earth from Indonesia, created figurines of drums, animals, pots, stars and flowers, and in the meantime we nourished ourselves with the artistic encounters, festivals, workshops and laboratories that have taken place in the Interlokal Lumbung, bringing together a wide variety of cultural expressions, as well as disciplines of scientific knowledge, traditional knowledge and youth initiatives.

With them we understood the importance of creating open spaces for the dissemination of knowledge and integrated support systems; we learned that to hack the system you have to be on the inside as we get to know each other and develop the capacity to create our own agreements and stick to them.

Postcards from the future

This project by audiovisual and communications collectives is based on dialogue and the twinning of processes between Buenaventura and Nuquí. These seedbeds have put Más Arte Más Acción in collaboration with neighbourhood processes such as Tura Hip-Hop, Puerto Creativo, Yemayá Producciones and En Puja.

Postcards of the Future is the creation of 6 postcards in the form of documentary films that tackle questions regarding well-being and good living, as well as the horizontality of audiovisual scenarios in Colombia. The postcards document different problems that afflict groups of young people who constantly confront racialisation and structural violence. One of the short documentaries is “Tribugá” (directed by Aida Leidis Palacios, David Palacios) in which it is possible to understand and learn about the case of forced displacement and the massacres in the village of Tribugá in Nuquí. These situations were used by developers who aim to build the Port of Tribugá, which today many local people and groups have opposed.

Another of the themes connected to the above is the analysis of extractivist practices from the Port of Buenaventura, a critique of productivity versus manual labour, the rhythm and unbridled eagerness of capitalist life, explored through “Silencio” (Direction: Brandon Giuseppe Rentería).

“Alabadas” (Director: Nicolás Ángel) narrates the resistance of the people of Nuquí, through women who live there, as well as addressing the assassination of social leaders in Colombia who defend human and territorial rights.

Different stories blend together to become a series of poetic images. They speak to us from memory and the struggle against oblivion. Animation is a way to travel through the territories, said Fernando Arias, Tahuanty Jacanamijoy and Henry González.

Agueda is a video art/animation inspired by the story of a woman called Águeda who was forced by one of her sons to leave her home.  In the story with no human voices, Águeda takes the form of a snake that guides the journey of a man of indigenous ancestry into the thick forest where Agueda once lived, reminding us the disconnection of humanity from the natural world in these times of man-made climate change.

The poetry in this video art/animation reminded us to reflect on the disconnection and the importance of reconnecting with the natural world, in order to understand the enigmatic language of the forest and our place on planet earth. The importance of remembering in different ways, along with the power to transmit sensations and experiences that are difficult to verbalise.

In this Lumbung we lay the foundation of a purpose to repair and continue the struggle against the oblivion of all black women and their families who have been displaced from their land in the Colombian Pacific.

This project brings together the musical group Tambacúm, the Corporación Pacífico Mujer, Sonidos Enraizados and Fausto Moreno from Coquí. They join forces to create a bank of sound memories, and to document formats of composition and interpretation of the traditional music of the municipality of Nuquí.

In an exercise of memory Cándida, as a wise elder of her community, transmits the oral practices of her ancestors and it is the young group of Tambacúm who receive this to interpret the traditional music of their land.

In this exercise, Sonidos Enraizados joins together to develop the process of production and sound recording of these practices of living community culture, under an initiative of listening to the deep desires of those who seek to revive the music and oral traditions of Nuquis. They carry out the exercise of mapping, collecting and sharing this music in other spaces through different exercises.

“What we want is to preserve. We want our children and our children’s children to know what our ancestors did. I am very proud of the process that is being done, it is very important that our culture, our traditions, our songs and dances are not lost”.